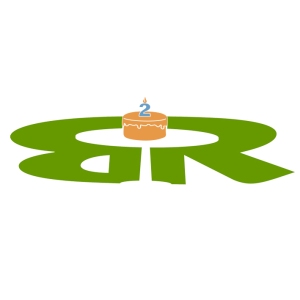 This week I passed the second anniversary of starting The Back Row Diner. Like a two-year-old, this blog has grown from a new-born that eats a lot, to a small voice that doesn’t make much sense.

Still, when I started TBRD I wanted to get back into writing, while at the same time justify eating out more. This blog has allowed me to do both of those things.

So to those of you who regularly come back to read, thank you… I question your time management, but thank you. To those of you who’ve stumbled upon The Back Row Diner for the first time, hopefully you can find a review or an interesting topic in my archives that gets you excited about food.

I look forward to continuing to post and becoming a better food writer, but mostly to sharing my love of food with everyone.

When I moved to New York, I imagined myself running through the streets, overwhelmed with how many restaurant choices I had, and twirling around while throwing my beret in the air…

What actually happens is I end up at my company’s cafeteria 3-4 lunches a week (though they have surprisingly good dishes that range from swordfish to paella to a delicious salad bar) and then I come home to a glowing Seamless app on my tablet, wooing me to sit on the couch and watch re-runs of The Dick Van Dyke Show. (For those of you counting, that’s two Mary Tyler Moore references so far.)

That said, my excursions away from the “norm” this week were pretty successful and it reminded me that I need to be more explorative in my food choices.

On Saturday, my wife found a great breakfast spot on the Upper West Side called Good Enough To Eat, where I had a hearty Corned Beef Hash and she had a terrifically flavorful bacon, tomato and Gruyère omelet. Perfect meal before a day of museum hopping.

That night we had our choice of many places while walking through K-town and discovered a new love for soju (a Korean liquor) with our squid hot stone bowl and bulgogi.

And today, I braved the rain to try a Cuban restaurant everyone talks about called Tina’s and was not disappointed. I ordered the Cuban sandwich this time (but can’t wait to try the entrees later) and found a great meal that I now can order within ten minutes of leaving my desk.

So – though the weather is getting worse – wish me luck in my excursions to turn my overly romanticized idea of eating in New York into a reality. Even if it just means going down the street to Park Slope and finding the jalapeño cream cheese I’ve been craving since I left the West (which I found at Bagel Pub on 9th St.), and which happens to be not that far from where Mary Tyler Moore was born in Brooklyn, boom! that’s three…

I got to have a terrific meal at Sugarcane in Brooklyn (Flatbush and Bergen) the other night. My wife and I have a soft spot for Caribbean food as we met and had our first few dates in Jamaica, while working on a humanitarian project. Therefore, we are always searching for the amazing food that reminds of those times.

Which is why we were so excited to find Sugarcane! The atmosphere alone was worth going back for. There was an excited, happy energy running through the entire place that didn’t let up the entire meal. The seating was cozy and made for a very friendly, comfortable experience. The stranger seated to my right even said “Enjoy!” as our dinner was served.

I had the Heritage Stew Chicken with fried plantains and macaroni pie, while my wife had the Jerk Chicken with Callaloo soup and coconut rice. Everything was amazing. The flavors from my chicken were full and developed and the meat was tender and juicy. The jerk had a perfect balance of sweet and hot that made us smile with every bite. Even as leftovers a couple of nights later, the flavor still made my eyes roll.

I can’t wait to go back to try the roti (one of my wife’s favorite Caribbean snacks) and possibly the Creole Whole Snapper. That was the dish we had on our first date in Port Royal off the coast of Kingston and though we won’t be able to watch them fish it out of the water next to our table like we did in Jamaica, I know it will still be fantastic.

I was recently reading an nice piece on Food52 by Amanda Sims called “What Makes a Coffee Shop Truly Great?” Having just moved to NYC from the Northwest, I’m in search of the perfect coffee shop as well. Below are a few thoughts on her article and on the topic in general (a version of which is posted in the comments section of her article as well). 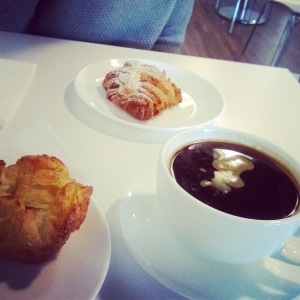 The coffee is paramount, of course. I have a list I try to go through with new places. If I enjoy a simple black coffee on my first visit, I’ll go back a second time and order a Cappuccino. If that passes the test (which I realize is arbitrarily subjective), I consider it a worthy regular stop-in. Then I can explore Americanos, Chai Lattes, other roasts, house blends, etc…

Many people have preferences on mugs. In my book, eclectic mugs are cool and ceramic, essential. I even have a hard time taking paper when I’m on-the-go because it’s wasteful (I do realize that many places only offer paper cups, so you sometimes have to choose your battles). However any place who wastes unnecessarily, such as using a second cup or a Styrofoam sleeve to protect from the heat doesn’t get a second look from me. I’ll do my best to not even use a cardboard sleeve if possible. A lot of people get to-go cups and then sit in the shop. If you know you’re going to leave before you’re finished, that’s one thing, but if you throw that cup away as you walk out the door I hope you’re next stop is the city dump so you can see what that mentality does to not only the earth, but the infrastructure of the city.

A place to plop down and get some work done is great and some snacks/food make the whole experience great. I’m not one to spend more than a couple hours at a time in a coffee shop though – even if I am plugged in electrically and wifi-ly – mostly because I hate when someone sits at a table in a full café for an hour-and-a-half with an empty espresso cup (or with their feet up on the only empty chair in the place, really?!). I don’t think it’s too crazy to say that you should always have a drink or food that you’re working on. When I’m done, I give myself about 10-15 minutes to finish my conversation and give my table to someone else. I feel like that’s reasonable. 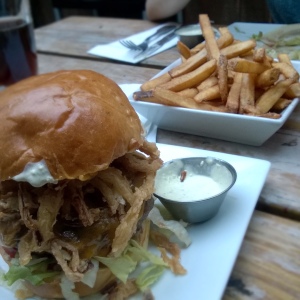 Last night we went to Burger Bistro’s Bay Ridge Location. We got to sit out on the back patio with a nice “almost-autumn” breeze and enjoy the stylings of Pink Floyd and Led Zeppelin. I really like the concept of making your own burger and checking the box for your preferred items on a laminated menu. Options included everything from which type of meat you wanted your burger made out of, how you wanted it cooked, what toppings, sauces, buns, sides, drinks, etc…

The burger was delicious. It was a hefty, thick patty, that had a homemade taste to it and was made of high quality meat. I enjoyed mine with jalapeño mayo, cheddar and frizzled onions. Nothing was greasy, just fresh tasting and flavorful.

The only issue I had with Burger Bistro was the price. I don’t mind paying more for a high quality burger, but each topping was extra (except tomato, lettuce and onion) and that included the sauces. So if you want cheese, a condiment, and a couple other things to round out the flavor, multiply each one by $1.50. Doesn’t seem bad until you realize you’ve just added $7.50 to a $9 burger. I’m guessing that they don’t want people ruining the burger’s taste by adding every topping on the menu and I respect that, but I’m not one to overdo it. I just want a flavorful burger with a little kick and a layering of flavors.

I feel like this concept could be great, while at the same time not picking through your wallet on every little detail. Make more of the toppings and the first sauce free, then maybe the “$5-fries-a-la-carte” won’t seem so gouge-y either. Again, loved the burger, just didn’t love the feeling that I would be charged if I asked for another napkin.

A couple weeks ago I went to Nightingale 9 for lunch in Carroll Gardens, Brooklyn. The sign for their “Bahn mi and drink for $10” lunch special was too great of a deal for me to pass up. 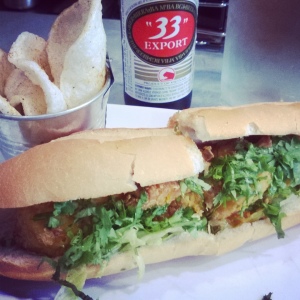 I chose the “redfish” Bahn mi which was very tasty. The fish was lightly breaded, the sauce had a mild, but noticeable flavor and the cilantro wasn’t overpowering (I’m one of those weird people who is biologically averse to cilantro, so I love when it doesn’t overpower a dish).

With my sandwich I chose the Vietnamese beer “33” Export. For some reason I have a soft spot for Asian beers – Singha, Sapporo, Tiger, Chang, all of them (probably the memories) – and this one just got added to the list.

I’d definitely go back for lunch or maybe for a late drink as they had a pretty extensive bar as well. 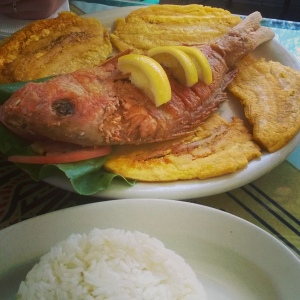 While looking at apartments in Briarwood, my wife and stopped off at Los Bucaros on Queens Blvd. for lunch. I’m a sucker for Colombian food and I’m glad we went in. The staff were very friendly and helpful.

We ended up sharing the fried snapper dish (which was huge, so I’m glad we did). It came with a salad, extremely flavorful white rice, and fried plantains on the side. All for $14.

I also tried a Buñuelo Colombiano, which I’d never had before, and which I’ll now have every chance I get. A buñuelo is a deep-fried sphere (and I mean, perfect sphere) of corn starch, yucca flour, a salty cheese. I loved this snack and had it with aguapanela (cold), but am going to try to make them this winter to have with coffee or hot chocolate.

So the next time you’re in the hot spot that is Briarwood, make sure to check out Los Bucaros.